The Sun bear (Helarctos malayanus) is native to south-eastern Asia where it lives in the tropical forest.

It is called Sun bear because it sports a crescent-like patch of orange or creamy white on its chest, which contrasts sharply against the rest of the fur which is usually jet-black or grey. This species is also known as Honey bear since it is fond of raiding honeycombs. 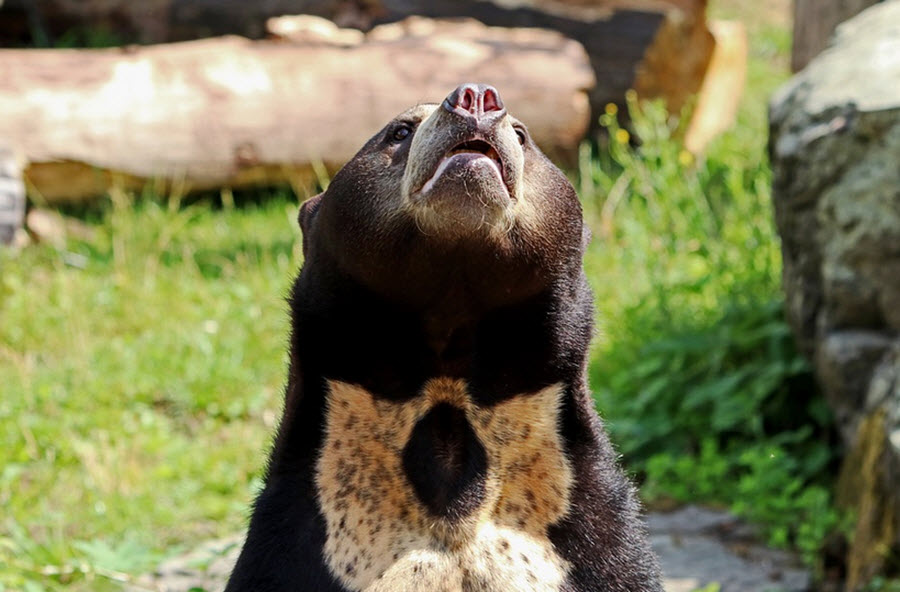 This is the smallest of the bears. It rarely reaches 70 cm at the shoulder and the weight will typically stay within the 25-65 kg span. It is stockily built, with small round ears and a short snout. The front feet are turned inward, probably to aid climbing. This is the most arboreal of all the bears, and is often found resting or sleeping in 2-7 meters above the ground. It is considered a day-active species but can become more nocturnal when living close to human settlements.

The Sun bear is classification as Vulnerable by the IUCN. The main threats are deforestation, poaching for food, and the illegal wildlife trade. Sun bears are also killed by humans when they enter agricultural areas.

The northern limit for the Sun bear is north-eastern India, and its range extends south and south-east into places such as Bangladesh, Cambodia, Myanmar/Burma, Laos, Thailand, Vietnam, Brunei, Indonesia, and Malaysia. They have also been sighted in China´s Yunnan Province.

Sun bears used to live in Singapore, but are now extinct there.

Sun bears live in tropical forests; both deciduous and evergreen.

They are normally found at fairly low altitudes, but this varies depending on location. In India, Sun bears have been reported up to 3,000 meters above sea level.

Sun bears are generally solitary animals, but the cubs stay with their mother for approximately three years.

This bear is an excellent climber and has a very arboreal lifestyle, which includes resting and sleeping 2-7 meters above the ground. It likes to sleep in tree branches, but can also seek out cavities in trees, fallen logs and under tree roots.

The Sun bear can swim well.

Sun bears are not known to hibernate. 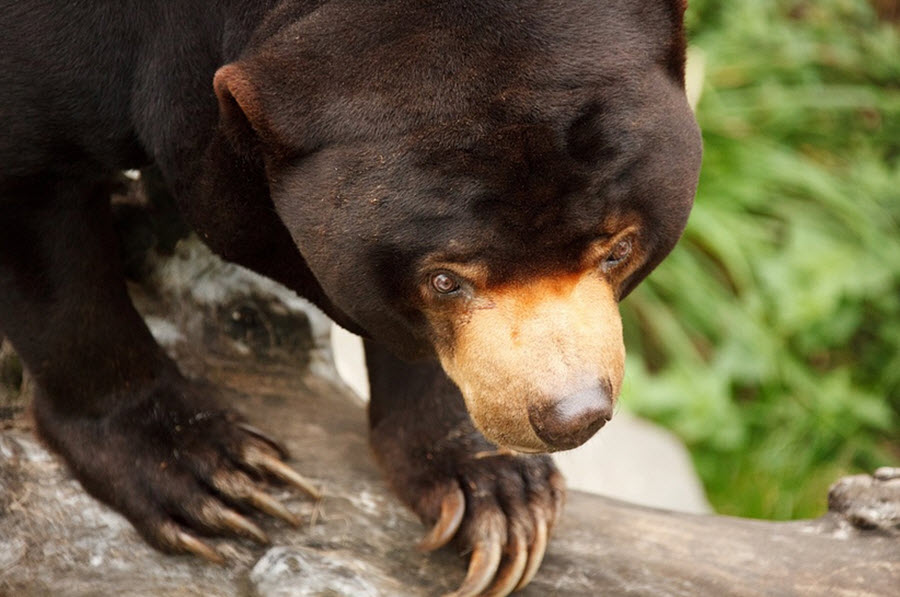 The Sun bear is an omnivore bear that feeds on a wide range of food types.

Here are a few examples of Sun bear food:

They can use their long, sharp claws to tear open hollow trees in search of bees and honey, and those same claws are capable of breaking into termite mounds.

Sun bears are very fond of figs and will devour them whole.

Sun bears reach sexual maturity when they are 2-4 years of age.

Cubs are born year-round. The birth normally takes place inside a tree cavity. The cubs are kept on buttress roots at the base of a tree where they will stay until they have learned to climb.

A litter typically consists of one or two cubs, who are born deaf and with their eyes closed. The eyes open around day 25 but won´t work well until the cub is roughly 50 days old.

The cubs will stay with their mother for roughly three years.