The Spectacled bear (Tremarctos ornatus) lives in northern and western South America. Since it is strongly associated with the Andean mountain range, it is also known as Andean bear and Mountain bear. In the regional languages Aymara and Quechua, this species is called Jukumari, and its Quechua name is Ukumari or Ukuku. 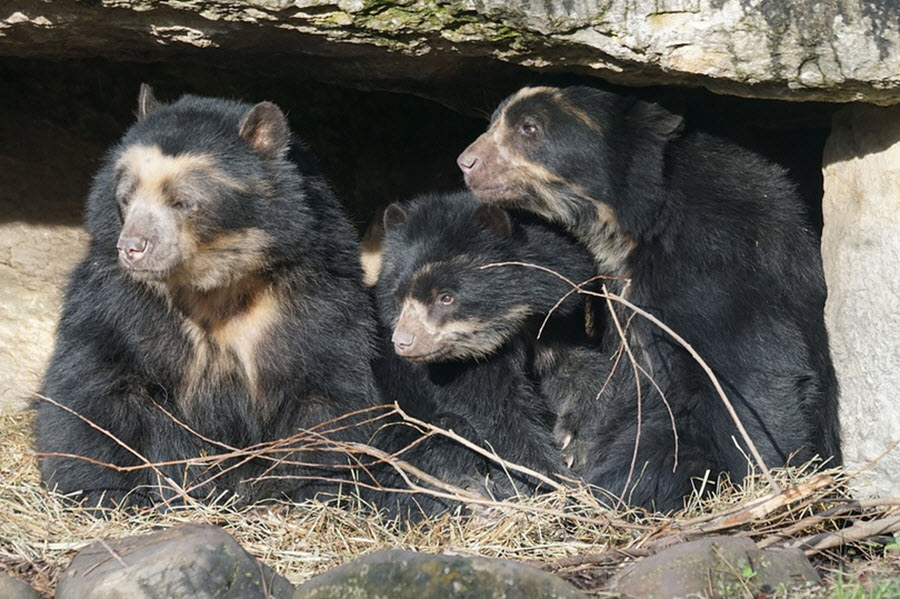 This is the only extant bear species native to South America and also the only surviving member of the subfamily Tremarctinae. Compared to other now-living bears, the Spectacled bear has a rounder face, with a short and broad snout.

The Spectacled bear is classified as Vulnerable by the IUCN. The main threat is habitat loss.

The Spectacled bear is strongly associated with the Andean mountain range, but occasional specimens are encountered in nearby areas.

Examples of places where you can encounter Spectacled bears:

The Spectacled bear is an adaptable species, and a few hundred years ago it could still be found in a wide variety to habitats and altitudes in South America, including cloud forest, dry forest, scrub desert, and high-elevation grasslands. Since then, the population has decreased dramatically and fragmented, and the choice of habitat has become more limited due to human activities.

Today, Spectacled bears are chiefly found in humid montane forests (cloud forests). The exact elevation depends on latitude. Spectacled bears are rarely reported below 1,900 meters today, although occasional specimens have been seen as low down as 250 meters above sea level.

Spectacled bears have been reported up to the snow line at over 5,000 meters.

This is a mid-sized bear where the shoulder height is 60-90 cm.

Adult males have a head-and-body length of at least 150 cm, with some individuals reaching up towards 200 cm. Females can be as small as 120 cm.

The fur is blackish, with individual variations ranging from jet black to dark brown and even reddish. It is called Spectacled bear because of the distinctive beige or ginger-coloured markings present on its face and upper chest. (But not all Spectacled bears have spectacle-looking markings.)

The tail is around 7 cm long. 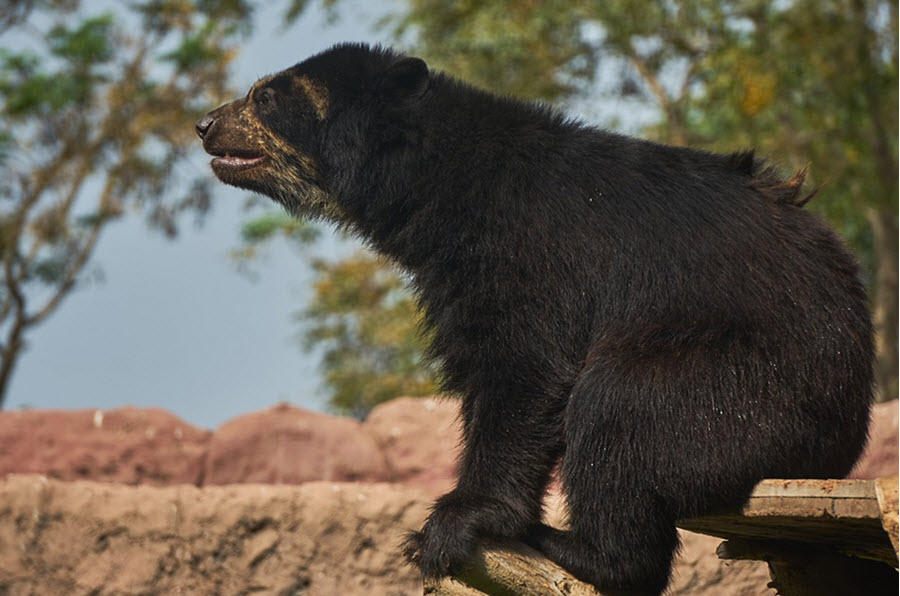 Just like the American black bear, the Spectacled bear spends a lot of time in the trees. If it notices a human nearby, it will usually climb up a tree to getaway. Females with cubs can decide to attack instead if they feel that the cubs are at risk.

The Spectacle bear builds itself is a platform in a tree and uses it to rest, stay hidden and store food.

Even though this species belong to the order Carnivora, less than 10% of its diet is comprised of meat and it is more herbivorous than the average omnivorous bear.

It likes sweet things, such as honey and berries, and is known to help itself to cultivated sugarcane and corn if possible.

Even though it rarely hunts, it can kill and eat deer, llama, mountain tapir, horse and cattle, as well as smaller prey like rodents and ground-nesting birds. It will also eat carrion, and some of the stories about bears killing cattle and horses might actually be the result of farmers assuming that the carrion-eating bear must be the cause of death.

The oldest known Spectacled bear lived at the National Zoo in Washington DC, United States, where it attained an age of 36 years and 8 months.

We do not know much about their lifespan in the wild, but they are believed to live for at least 20 years.