The Polar bear (Ursus maritimus) is one of the largest bears and can grow to approximately the same size as the Kodiak bear (Ursus arctos middendorffi). An adult male weighs around 350-700 kg while the females stay considerably smaller. 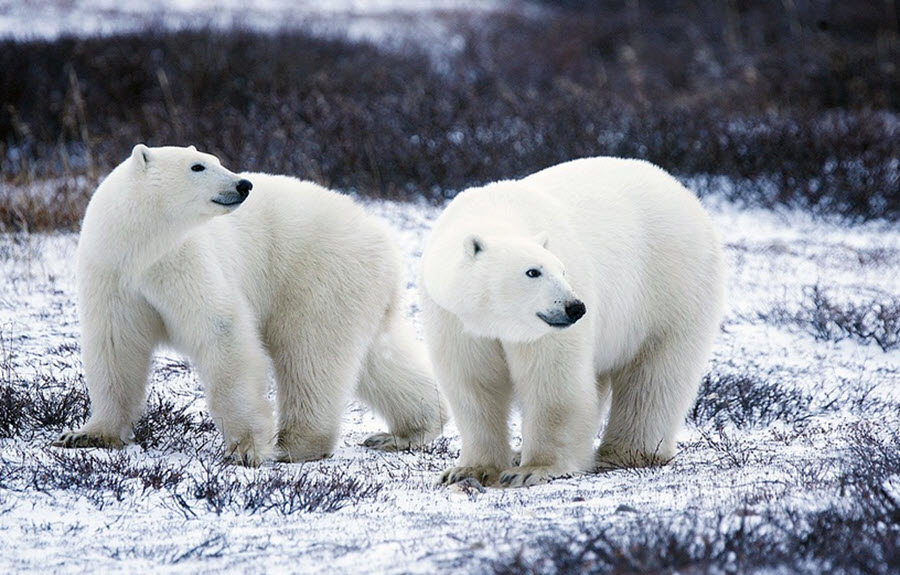 The Polar bears live chiefly within the Arctic Circle and are highly adapted to life there. Unlike most other bears, they are hyper carnivorous rather than omnivorous. The Polar bear is fairly closely related to the Brown bear (Ursus arctos) but has evolved to occupy in a much more narrow ecological niche. The flexible Brown bear is found in a wide range of habitats and climates, while the Polar bear is much more specialized. It has a great capacity for enduring cold weather, move across snow and ice, and swim in cold seawater. Polar bears are born in a den on land, but will spend most of their life on the sea ice, hunting for seals from the ice´s edge.

The Polar bear is classified as Vulnerable by the IUCN.

As mentioned above, the Polar bear is one of the largest bears. Males measure 2.4-3 metres in total lenght, have a shoulder height of up to 160 cm, and typically weigh 350-700 kg. Females measure 1.8-2.4 metres and weigh 150-500 kg, but those who manage to reach the upper part of that weight range are normally pregnant.

The largest recorded polar bear was a male shot at Kotzebue Sound in Alaska in 1960. This individual weighed 1,002 kg. When mounted, it stood 339 cm tall on its hindlegs.

Compared to the Brown bear, the Polar bear has a more elongated body. The legs are stocky.

The Polar bear has the shortest tail of all bear species, and the tail is normally just 7-13 cm long.

The ears are small, which is probably an adaptation to the cold conditions. 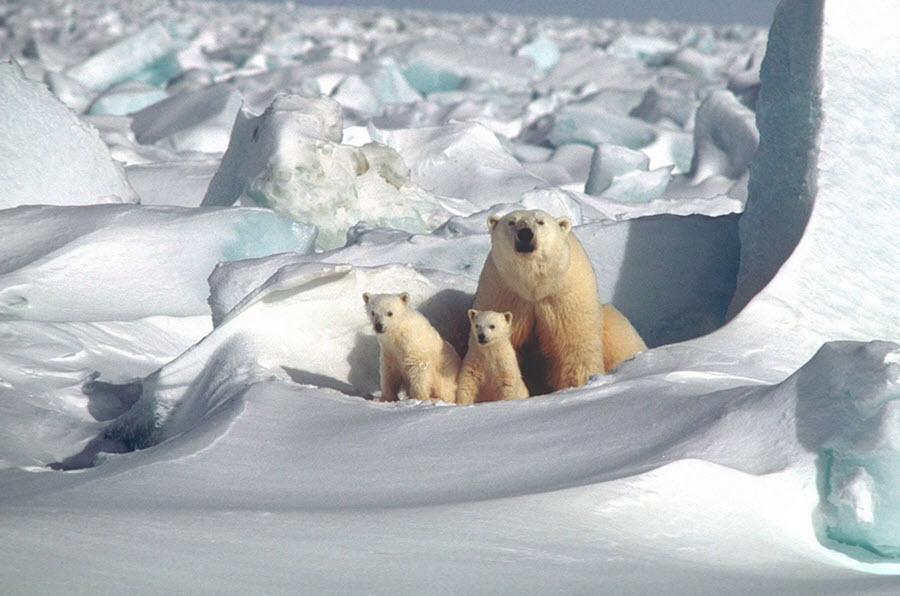 The feet are big and can measure up to 30 cm across, which makes it easier for the Polar bear to walk on snow and thin ice. The big feet also come in handy when swimming.

The pads are covered in small, soft papillae which helps the bear get traction on slippery ice.

The claws are short, stocky and deeply scooped on the underside. They are very good for gripping heavy prey (like a seal) and dig in ice.

The teeth are adapted to a highly carnivorous diet. Compared to the Brown bear, the Polar bear´s cheek teeth are smaller and more jagged, and the canines are bigger and sharper.

Polar bears are highly skilled and tenacious swimmers and can swim for days. One prime example is the female polar bear who swam continuously for 9 days in the Bering Sea to reach ice far from land. During this 700 km long swim she lost 22% of her body mass.

The polar bear has a lumbering gait and typically maintains an average speed of less than 6 km/h when walking, but it is capable of sprinting at 40 km/h.

Adipose tissue, hide and fur all help the Polar bear maintain its body heat. The adipose tissue can be up to 10 centimeters thick, and the fur consists of two layers: the dense underfur and the outer guard hairs.

Because the Polar bear is so well isolated, it is almost invisible under infrared camera.

The polar bear can smell a seal from almost 1.6 km away and buried under 1 metre of snow.